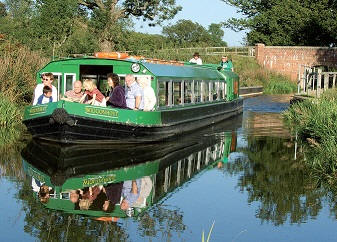 Our Spring Run and canal boat trip was a resounding success. We had 30 people pre-entered for the run itself, with a full boat load of 50 people for the canal trip. On the day, which wasn’t very promising with some rain forecast, 20 cars turned up at the start at Denbies Vineyard, and 34 people for the boat trip on the Wey and Arun Canal.

At the start at Denbies, we were sharing the car park with the Surrey Vintage Vehicle Enthusiast Club, who we starting a treasure hunt from there; they had mainly classic cars such as Jaguar E-types and XKs. We had cars ranging from a TD to modern MGFs and ZTs.

The Run itself was 53 miles long, through some nice roads with the fresh greens of spring at their best, together with carpets of bluebells and primroses.

Soon after midday our boat left the quayside at Loxwood, for a 45 minute cruise south, through two locks, before turning back to Loxwood. The fact that it was a specially built electric boat for the Canal Trust meant that it was a peaceful trip through the countryside, and one was able to converse without the usual engine noise. It also meant that we could hear the commentator specially hired for the trip.
The Wey and Arun Canal was opened in 1816 to connect the Wey Navigation to the river Arun, ensuring a commercial route for goods mainly from London bound for the South coast. Previous to the canal being built, it had taken 4-6 weeks for pack horses to cover the distance, which then took just 4-5 days afterwards; a great improvement. This canal was called “London’s missing link”, and also boasted a branch connecting to Chichester and Portsmouth Harbours. It ran from the Wey Navigation 23 miles south to its connection with the river Arun, with a rise of 48 foot to the summit and then a 59 foot drop down to the Arun. The depth is surprisingly shallow at 3-4 feet, so if one falls in you walk to the bankside to get out, albeit somewhat smelly!

The canal was a minimum of 12 foot wide, so as to accommodate full sized barges, which often used sail power as well as being horse drawn. These barges could carry a cargo of 80tons, which consisted of flour, bricks, gunpowder from Shalford, and even gold, which required a Marine escort! It was interesting to be informed that the person who invented the mitre lock gates was none other than Leonardo da Vinci, in the 15th century.

The canal cost was largely paid for by the Earl of Egremont of Petworth House who put up a huge sum of £100,000. In 1871 the canal finally closed as a result of the railways taking away the cargoes. The strips of land were then devolved to the local landowners, which has made it difficult to open up the canal once again. Some sections have a lease agreement with the owners to use the canal again, but some sections have unfortunately been built on, or the owners are not being co-operative.

The canal runs close alongside the river Lox, from where much of its water is obtained, but keeping the canal water level maintained means that originally windmills were used to pump water up to the top pond near Dundsfold. Nowadays water is pumped back automatically once a lock has been used; these loose 40-60,000 gallons each time they are used.

The Wey and Arun Canal Trust is a charity, set up in 1970, since when much work has been done to restore the canal, and particularly the locks (68 ft long by 12 ft wide). There are 3000 members of whom about 300 are active volunteers, who carry out most of the restoration work. Each lock gate weighs in at 2.5Tons! So fitting these is quite an undertaking. The southern locks were built of stone and didn’t need much work, but the brick built, northern locks had been robbed of their bricks, requiring them to be completely built up from the base, which was all that remained. A recent new lock and wharf at Loxwood cost £1.2 million. The trust’s income is largely from the boat trips, which bring in £40-60,000 a year. The skippers of the boats have to be licensed by the Marine and Coastguard Agency, and both theoretical and practical tests have to be taken to acquire an impressive passport type licence.

As well as the 50 passenger boat we used, there is a 27-person narrowboat and a small 12 person boat. They operate on Saturdays, Sundays and bank holidays from Spring to Autumn. For further information go to their website www.weyandarun.co.uk
We were very pleased with this new attraction to our regular Spring Run and hope that we can do something similar in the future, such as a windmill or watermill visit; any ideas would be welcome.