The MGCC 90th Anniversary was celebrated in the SE Centre on 18th October with two runs, a week after the official anniversary so as not to clash with the main club event at Gaydon Museum. One of the runs was in the west of the Centre centred on Surrey and Sussex with a circular route starting and finishing at Kingsfold near Horsham, with the other in East Kent running from Herne Bay to Birchington. The event was carefully arranged under the Guidance of Motorsport UK, to ensure full compliance with the Covid-19 requirements. John Bennett organised the East Run and David Griffiths planned the West Run route.

The start venue by the sea at Hampton Pier, Herne Bay was very attractive and a good choice in terms of safely accounting for the arrival of entrants.  Bearing in mind the great distances that some people had travelled (as far away as Hatfield), it was not surprising that arrivals were not always in their planned sequence. Some members adopted special measures to ably demonstrate the lengths that some of our entrants went to in Minnis Bay to maintain their social distance! One photo shows John & Sheila Bennett using their Covid-19 tape measure to keep distance whilst the second photo shows Ian & Paula Russell demonstrating their Covid special 2metre string and cocoa tins method of communicating to each other which is a great way forward!

25 cars took part on a route of just over 40 miles which passed windmills at Herne, Hillborough, Sarre, Wickenbreaux, (actually a water mill), Chillenden, Northborough, Eastry and Sandwich on the way. The finish was at ‘The Minnis Bay’ Bar and Brasserie, Birchington. In addition to The Minnis Bay, there were numerous food outlets on the bay and fish and chips prover popular.

Two Covid-19 Officers were present to monitor proceedings with sanitising stations and posters located in the car park and refreshment/toilet venue. We were also very lucky with the weather, warm and fairly sunny with very little wind. We have also potentially increased MGCC membership on the day, but time will tell! 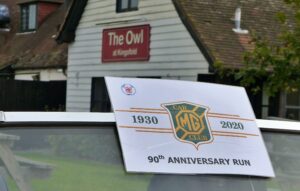 Whilst the sun did not greet us on Sunday 18th October, the day dawned fine and dry, although a little misty at the start. Some 45 entrants  gathered for the Western run centred on The Owl at Kingsfold, on the Surrey / Sussex border. Many eager entrants arrived in the car park by 10.00am and spectators experienced a wonderful display of pristine MGs, many with hoods furled, from the L2 of David and Ann Naylor and Peter Wallace’s splendid VA, through virtually all the MG models to the rare 5 lire SV-R of David Hamilton and the latest model from the MG factory, being the all-electric MG ZS EV of Robert Vincent.

It was good to be able to return to some form of normality and to maximise the day, there was much chat behind masks, whilst respecting social distancing, before adjourning to the pub, where bacon rolls and coffee had been organised.  Having taken on board much needed fuel for the circular tour, drivers and navigators departed in groups from about 10.30 am to start the circular tour, which extended to about 46 miles. The varied route  included many Surrey and Sussex villages, and great views ‘en route’ of the North and South Downs. Features along the way included  Dunsfold- the home of Top Gear and Loxwood, where the Wey Arun canal has been re-aligned including construction of a new lock to enable it to pass under the road.

The run took about 90 minute to complete,  and on returning to The Owl, many of the participants took advantage of lunch in the pub.  A day to be remembered and one to be repeated, hopefully in the not too distant future.

We use cookies on our website to give you the most relevant experience by remembering your preferences and repeat visits. By clicking “Accept”, you consent to the use of ALL the cookies.
Cookie settingsACCEPT
Manage consent

This website uses cookies to improve your experience while you navigate through the website. Out of these, the cookies that are categorized as necessary are stored on your browser as they are essential for the working of basic functionalities of the website. We also use third-party cookies that help us analyze and understand how you use this website. These cookies will be stored in your browser only with your consent. You also have the option to opt-out of these cookies. But opting out of some of these cookies may affect your browsing experience.
Necessary Always Enabled

Any cookies that may not be particularly necessary for the website to function and is used specifically to collect user personal data via analytics, ads, other embedded contents are termed as non-necessary cookies. It is mandatory to procure user consent prior to running these cookies on your website.