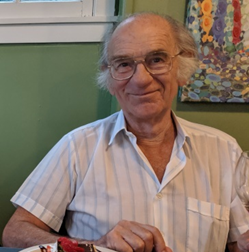 In recent years, Piers and Linda are known for being the founding members of the Surrey Wanderers some 23 years ago, a weekday lunchtime Natter and according to the pubs list, starting at The Dolphin, Betchworth. This natter concept has now extended into many SE Centre areas and the numerous lunchtime natters are some of the most active groups of members in the region.

Piers, however, was more active by far in earlier years in the South East Centre. He joined the MGCC in 1961, at about the same time as he married Linda, and they supported the local Natter at the Sugar Bowl, Burgh Heath, Surrey, now a Premier Inn and Brewers Fayre. The South East Centre then was run by Gordan and Elsie Cobban, the backbone of the Club and SE Centre at this time, and Piers was invited to become Centre Treasurer in 1965. The South East Centre was much larger in the sixties, as younger centres such as Anglia and Abingdon Works had not been formed, and these areas were all part of the South East. The Centre was actively involved with MGCC Silverstone and other race meetings and Piers was involved with much of the race organisation.

Initially, Piers had a TA, which he bought in 1958, but when the family arrived, this had to be exchanged for a Y Type in 1965 and later a Z Magnette. Events such as the Beaulieu Summer Gathering became very much a family weekend from 1963 onwards.

Horror of horrors, the Magnette had to be sold and a Morris Marina was acquired in the early 70s and for three years, this was the only time in his motoring history that he didn’t have an MG!

Piers remained active on the SE Centre Committee for many years.  In 1992, Piers became main Club Treasurer when financial problems arose and he was instrumental in restoring sound finances. He also returned to race organisation in later years, when again finances were a problem, and worked closely with Ron Gammons on the MGCC Race Sub Committee until recently.

Piers also visited many overseas MG rallies and events, including USA, Canada, South Africa, Europe, Australia and New Zealand. The last big trip was to the Mid-West of the USA last summer, flying to Minneapolis and meeting MG friends to travel by road to Dubuque, Iowa, for the 44th MGA GT in North America.  Piers gave two talks on some of the history of MGs.  He was also a keen photographer and for many years, supplied numerous photographs of race meeting and club events to Safety Fast!

Piers will be very much missed in the South East Centre.

We use cookies on our website to give you the most relevant experience by remembering your preferences and repeat visits. By clicking “Accept”, you consent to the use of ALL the cookies.
Cookie settingsACCEPT
Manage consent

This website uses cookies to improve your experience while you navigate through the website. Out of these, the cookies that are categorized as necessary are stored on your browser as they are essential for the working of basic functionalities of the website. We also use third-party cookies that help us analyze and understand how you use this website. These cookies will be stored in your browser only with your consent. You also have the option to opt-out of these cookies. But opting out of some of these cookies may affect your browsing experience.
Necessary Always Enabled

Any cookies that may not be particularly necessary for the website to function and is used specifically to collect user personal data via analytics, ads, other embedded contents are termed as non-necessary cookies. It is mandatory to procure user consent prior to running these cookies on your website.